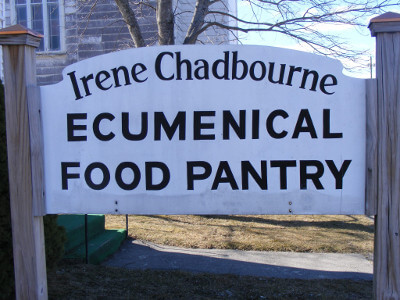 The Irene Chadbourne Ecumenical Food Pantry (ICEFP) operates many programs within the Washington County community. The pantry keeps fairly modest hours, but is now open three days a week for short windows- due to the fact that it is now serving a wider area of population than ever before. The closure of several smaller food pantries in neighboring towns has led to a surge in demand for aid at this location in Calais.

Many programs of this charitable organization are bustling throughout the year. In addition to the offerings of shelf-stable pantry basics like beans, rice, pasta, and canned items ICEFP also provides perishable items like milk, eggs, and cheese to those who meet requirements for food eligibility. The pantry can now accommodate an increased number of clients, with waiting area available thanks to a recent expansion of the facility. Winter fuel assistance, a backpack drive, and a collection for winter coats are amongst the long list of services ICEFP generously provides the citizens of Washington County. Len Hanson, Director of the pantry, has recently shared that the pantry supports over 250 families each month, up from around 125 families per month when he started in his current role 4 years ago.

In April of 2015, ICEFP took ownership and re-opened a thrift store on Main Street in downtown Calais, after the closure of an existing one last year. The space was donated to the pantry, and after a few renovations they were able to open the doors once again. The shop, open six days a week, sells gently used clothing and household goods all at very low cost to shoppers. All proceeds go directly to benefit the pantry programs and all staff members have volunteered their time for this cause! 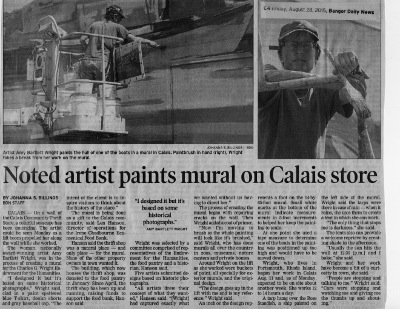 Opened in 1992, ICEFP was originally hosted in the basement of the Catholic Church in Calais, before moving to its current location in the remodeled home of a generous parishioner who donated the property to the Church for this purpose. In 1996 the pantry was officially incorporated as a charitable 501c(3) organization. CGWEH has had a long-standing relationship with the pantry since 2009. In addition to the support offered annually, we are proud to be a part of another NEW project to take place summer 2015, as part of a downtown Calais revitalization effort. A large mural painting has been slated to adorn the vacant building side of the Calais Thrift Store located at 255 Main Street. A depiction of Calais harbor at the turn of the 20th Century will cover an area of approximately 14’x65’-over 900 square feet! – As a mission to reinvigorate this seaport and international border town with a surge of energy through art and culture. Amy Bartlett-Wright, a renowned artist from Rhode Island, has been contracted by ICEFP to design and execute this large display of art in the heart of downtown. The work is to began mid August and will hopefully be completed by early September, weather permitting. A nicely planned seating area consisting of a few locally crafted benches and landscaping will be added to encourage travelers, residents, and passers-by to enjoy and learn about the natural and economical history of Calais.

About the artist:
Amy has worked for thirty-five years as a professional artist, as a muralist and natural science illustrator. She specializes in portraying animals in their environments in large and small scale that create a sense of space and dimension. She enjoys exploring the woods and shores of Rhode Island where she lives and works. Amy received a BA in Scientific Illustration from University of Maryland in 1980. While at UM, she worked as an illustration intern at the National Museum of Natural History, Smithsonian in the Departments of Botany and Entomology. She furthered her studies in painting and drawing at Rhode Island School of Design where she earned a Certificate in Scientific and Technical Illustration in 1990 and is now part of the RISD Continuing Education Faculty.

To Learn more about the artist Amy Bartlett, visit her website by clicking here!

The Charles G. Wright Endowment for Humanity is proud to support the efforts of The Irene Chadbourne Ecumenical Food Pantry. The mission of this organization, the programs, staff, and people served through the generosity of others is enormously successful in this small rural town in Maine. To Learn more about the Irene Chadbourne Ecumenical Food Pantry, visit their website by clicking here.

Your site doesn’t have any tags, so there’s nothing to display here at the moment.